Posted on February 26, 2014 by Maureen Crawford 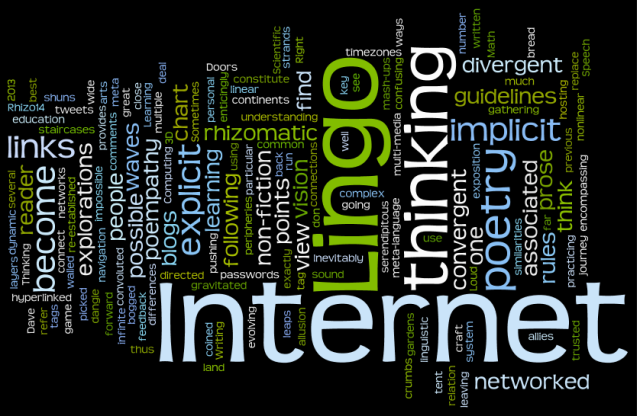 I have been thinking a great deal about the meta rhizomatic language of the Internet – the ways in which it is manifesting, the implications, where personal learning networks/PLNs fit into the picture (thinking about boundaries and peripheries and similarities and differences between networks and rhizomes) and the implication for both the education system and for life-long continuous learning.

I think that Internet Lingo (the term I use to refer to the meta-language of the Internet/ see previous posts) has much in common with poetry. Internet Lingo is associated with overwhelming amounts of information  . . . where exposition results in getting bogged down – best to tag, find key words and phrases that can be staircases to mystery chambers. Doors unlock not with passwords to walled gardens but through hyperlinked tags and trusted allies leaving bread crumbs. Curation is a form of practicing poempathy (a word I coined), gathering strands that dangle enticingly in one’s peripheral vision. The central, focused vision is reserved for navigation but the periphery provides for depth and serendipitous associations ~ waves of convergent and divergent thinking replace directed thinking.

Learning using Internet Lingo can be confusing. It is more implicit than explicit. Inevitably there are numerous layers (and leaps) that become more accessible after multiple readings. Sometimes there is no going back, only pushing or dancing forward with the traces of what you were able to connect with. It is close to impossible to run exactly the same route twice. There can easily be a wide range of interpretations or points of view. This is a 3D, nonlinear, encompassing everchanging ecology. In its multiplicity Internet Lingo shuns duality. Right and wrong become more and more relative. There is a sense of play, of allusion, an infinite number possible connections and sequences.

As I was thinking about waves of convergent and divergent thinking in relation to Internet Lingo – the following chart materialized for me. This is truly Thinking Out Loud and I invite both feedback and additions to the chart.

I don’t think it is an accident that, as we have been trying to grapple with the rhizomatic Internet Lingo associated with Dave Cormier’s hosting of #Rhizo14, several people have gravitated to the figurative arts and craft tent and used poetry and sound to paint our understanding.

Are you game for a dip into the land of Internet Lingo? The following links will mark a few possible start points to view Internet Lingo at work. What you will find is “written by far more than two people and consists of multi-media mash-ups of tweets, Storifies, blogs, and links too complex, convoluted and dynamic for any one reader to ever fully absorb. [It] is constantly evolving, thus forcing the reader to become a participant in a linguistic sense-making journey” (Crawford & Jones, 2013. unpublished). The dogtrax cross, the scent is lost, picked up and relocated, re-established across continents. . . and timezones.

In no particular order here is a list of links that constitute some portion of the poempathy that has been bubbling up. It is important to read the comments as well as the blogs! 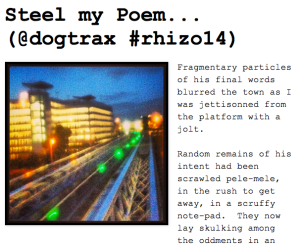 The comments are an important part of this post! 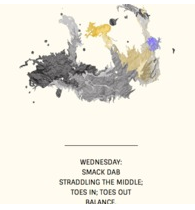 I work as a researcher and educational consultant. My undergraduate degree is in industrial design so design thinking has long been part of my process - emergent connectivist learning resonates strongly with me.
View all posts by Maureen Crawford →
This entry was posted in Uncategorized and tagged boundaries, curation. leaps, ecology, Internet Lingo, meta-language, networks, PLN, poetry, rhizomatic, thinking out loud. Bookmark the permalink.